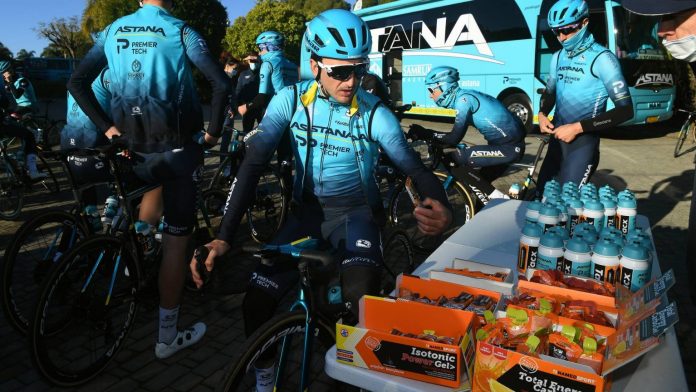 Find yourself in the race car alongside any Sports Director and you’ll hear these four words said into the race radio more than once. At Milano – Sanremo, it’s one of the most important reminders during the race. At 299 kilometres, plus the neutral zone, La Primavera is considered by many riders as the easiest Monument to finish, but the hardest to win. With the average rider burning around 6000 kcal throughout the seven hours spent in the saddle, a solid nutrition strategy can make all the difference.

As we gear up for the first Monument of the season, we sat down with nutritionist Aitor Viribay Morales to find out how our riders fuel for the longest one-day race of the year.

The countdown to La Classicissima

It probably comes as no surprise that carbo-loading is a priority in the lead up to the race.

“A 300-kilometre ride is always a challenge in terms of energy expenditure. Add to that, in the final 100 kilometres they will go as fast as they can, so the challenge becomes huge. It’s really important to start the race with enough endogenous carbohydrates available. As glucose is endogenously stored with water in form of glycogen, especially in skeletal muscle and the liver, the main two nutritional priorities are carbohydrates and fluids,” explains Aitor.

“A rider’s diet in the two days before the race should be high in carbohydrates and liquid. So we use sources like potatoes, rice, pumpkin puree, oats, or fruit smoothies. Protein is not essential as it is only one day of racing and fats are not a priority either. We always try to adjust foods quantities and quality according to races demands. Milano – Sanremo is the longest one-day race in the year and, although the relative energy expenditure is usually lower than other races, the absolute amount is much higher. So, following our nutrition plan, the riders will be eating bigger quantities than they would before any other one-day race.”

How much energy a rider burns in the race depends on a number of things, including the role they play in the team. That said, there are few sporting events comparable to Milano – Sanremo when it comes to counting calorie expenditure.

“It’s not possible to say exactly how many calories a rider would expend during the race because it depends on each cyclists’ role, and because the first hours are usually easier than in other races. But, we can assume an average of 800-900 kcal per hour (600-700 in the first hours and up to 1000-1100 in the final hours). So we would be looking at around 6000-6500 kcal. This is a huge challenge, only comparable to an Ironman race, for example.”

It will be an early start this Saturday with the peloton rolling out of Milano at 09:40. Add in the time needed to digest breakfast and the alarm clocks will be going off before 07:00. There’s a long day ahead.

“The pre-race meal will be, again, high in easy digestible carbohydrates and fluids. We try always to give the riders easy and efficient options like smoothies and juices, energy oatmeal and, of course, rice. Together with a normal portion of protein, usually an omelette or a skyr yoghurt, they will need to drink around 1-1,5L before taking the start. In this meal, the total amount of fats should be low so it’s not the day for an avocado or a big portion of nuts (maybe in the night after). Finally, they will need to respect a 2:30-3:15h window between having breakfast and being at the start. Although it won’t be a hard start like a mountain stage, for example, we need to ensure that the pre-race meal has been digested properly,” says Aitor.

As the clock ticks over from one hour to the next, that’s where NAMEDSPORT> comes into play.

“We plan a fueling protocol according to the expected intensity of each hour of racing, starting with lower quantities of carbohydrates and finishing with really high amounts. In total, we are planning an average intake of 90-110 g of carbohydrates per hour, which equates to around 400-500 kcal per hour. For this purpose, we use NAMEDSPORT>: Energybars, Total Energy Fruit Bar>, Total Energy Fruit Jelly> and, of course, Total Energy Carbo Gel>, Total Energy Strong Gel>, Isotonic Power Gel> as well as the rice cakes made by our soigneurs. In addition to the food products, we have the NAMEDSPORT>: HydraFit>, energy drinks, which provide a very efficient source of carbohydrates without adding other nutrients like proteins or fats. In total, riders will have two to three portions of food (bars, rice cakes or gels) with one fluid bottle per hour.”

The feed zone that is. Or in the case of Milano – Sanremo, feed zones. With almost 300 kilometres on the cards, Milano – Sanremo is unique in that there are not one, but two feed zones along the course. The first comes after 106 kilometres and the second 75 kilometres from the finish. But the two serve different purposes when it comes to nutrition, says Aitor.

“The two feed zones are completely different. Put simple, the first feed zone focuses on solid and more complex foods like the NAMEDSPORT> bars or rice cakes and is focused on hydration. However, the second one will be higher in carbohydrates, with more efficient sources like the NAMEDSPORT> gels or concentrated drinks and, probably, a shot of caffeine to give the riders a boost for the last part of the race.”

Arriving in Sanremo can be a reward in itself for lining up at a Monument is an achievement for any rider. If they’re lucky, riders may climb onto the team bus to be greeted with a slice of pizza. After all, we are in Italy right? But the day isn’t done when it comes to nutrition.

“As its a one-day race, we could think that recovery is not a limiting factor. However, our cyclists should not only perform in Milano – Sanremo, but also in the upcoming races. A big effort like this can represent an extremely high metabolic and physiological load which can require more than three days to recover. That’s why our recovery protocol will be focused on optimizing this period and shortening the time that our riders need to be back at 100%. We use different phases where we give them all of the necessary nutrients to recover well, starting from rehydration and refuelling, and finishing with reparation. Therefore, we use hypotonic drinks, carbohydrates and proteins in different textures like smoothies and meals, so that’s where we bring out the NAMEDSPORT> 100% Whey Protein Shake and Omega 3 Double Plus 60 Soft Gel,” explains Aitor.

Recovery: why not underestimate it? Our tips for post workout

SPORTS INTEGRATION DURING A MARATHON

NAMEDSPORT> - 24 June 2021 0
Of: AG2R Citroën Team If the quality of training is the main performance factor for a professional cyclist, nutrition is an essential part of the...

NAMEDSPORT> - 28 June 2021 0
Courtesy of: Dr. Luca PollastriSpecialist in Sports MedicineMedical Doctor Team Bike ExchangePENTAVIS - Lecco The consumption of an adequate amount of protein has long been...

From water bottle to functional bar: summer strategies in the saddle

Alessandro Manca - 30 June 2019 0
Our laboratories have developed three different BCAA formulations for three specific sporting and nutritional needs of anyone who exercises. Before we guide you through this...

How to supplement protein at breakfast?

Alessandro Manca - 7 September 2021 0
Protein at breakfast is often a big absentee on our tables. A good breakfast on the other hand, especially if you're a sportsman, should include...